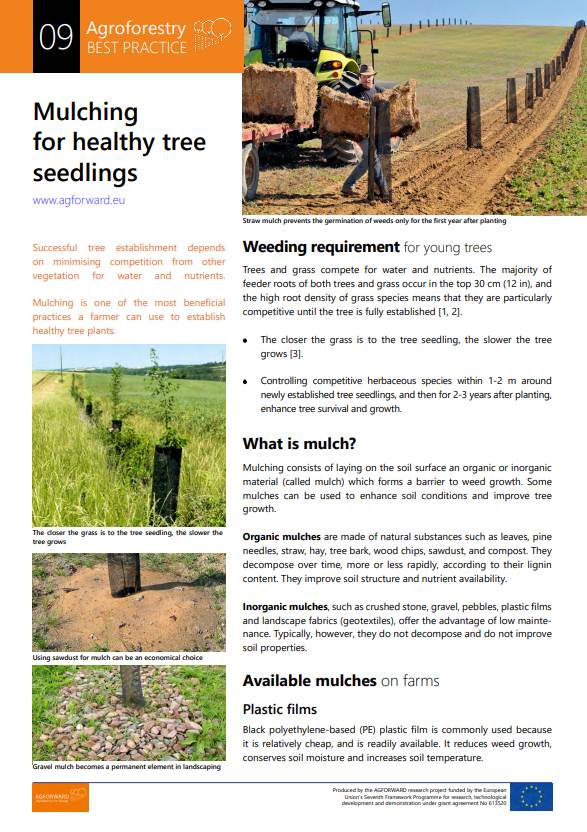 Successful tree establishment depends on minimising competition from other vegetation for water and nutrients. Mulching is one of the most beneficial practices a farmer can use to establish healthy tree plants.

"La Cabreta" (Spain): an outdoor goat and sheep production linked to forest and grasslands
“La Cabreta” is a Galician farm owned by a couple, Ermitas and Joan, who met in 2003 during an Erasmus fellowship, and had a common dream to start their own project: to live in the countryside and own their own farm.

Iceland is usually associated with fabulous and vast landscapes, strong winter, snow, ice and erupting volcanos. Regarding the trees, we know from history, they were cut by Vikings. The first settlers arrived in Iceland over 1100 years ago (874 AD), where they found surprisingly fertile soil. It is estimated vegetation (mainly heathland) covered even 60% land area. Woodlands at lower elevations composed mainly of downy birch (Betula pubescens) and covered at least 25% land area in total. Those plants initially protected against blowing out particles of loose volcanic soil, however man activities due to deforestation and intensive grazing resulted led to extensive degradation and catastrophic soil erosion situation. As Greipsson (2012) said, soil erosion was catastrophic for three centuries (~1660–1960 AD) and was characterized by almost total loss of vegetation and underlying soil. The progress of the fastest eroding front was rapid and counted 29.7 meters per year. The shift from downward to upward in afforestation took place sometime between 1950 and 1980. Iceland currently has about 2% of forest cover, including land rehabilitation activities and establishment of windbreaks – finally, Icelanders are wind experts… 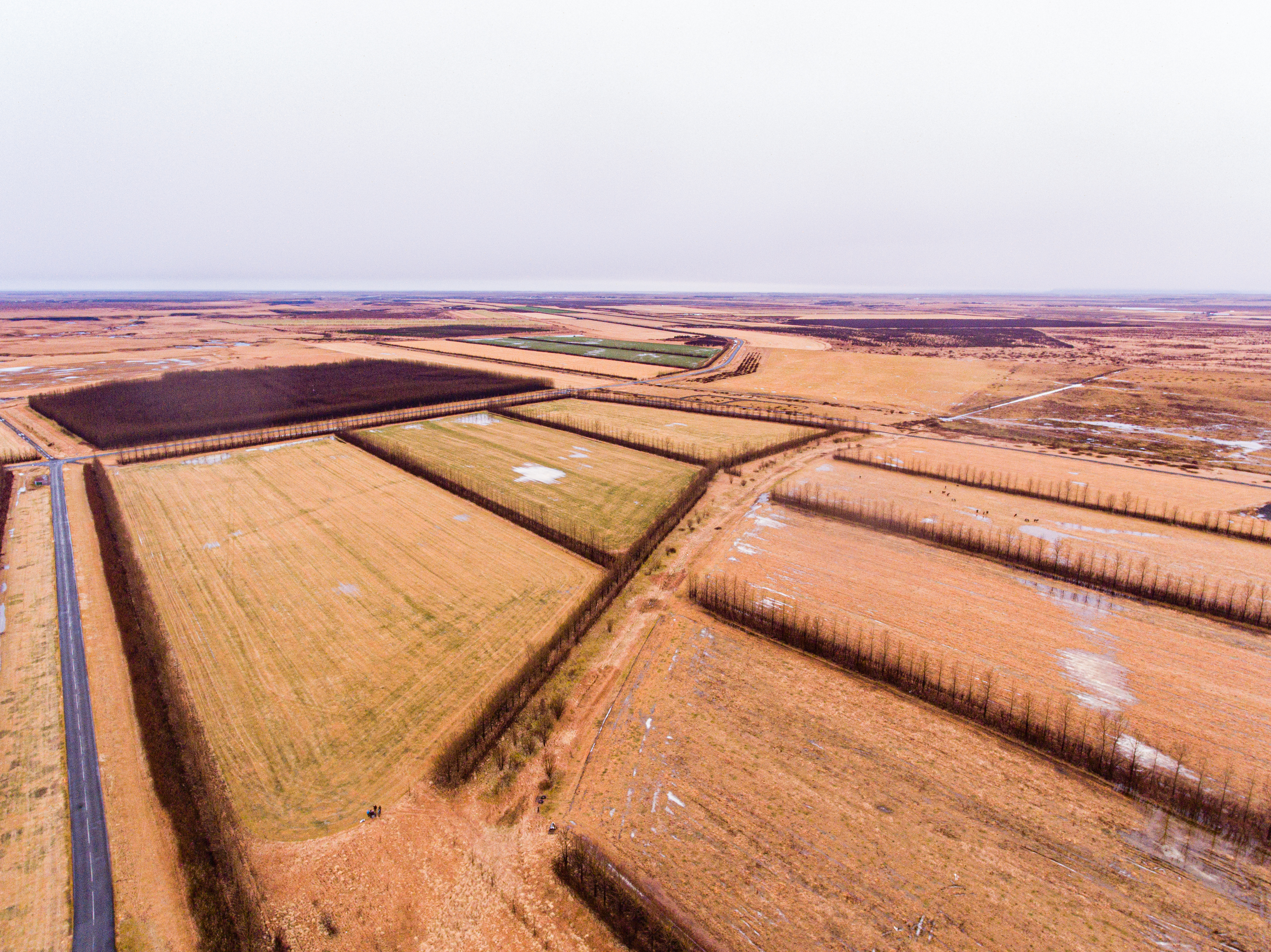 The farm in Gunarsholt is located 100 km East from Reykjavík, nearby Hella city and belongs to the governmental agency – Soil Conservation Service (SCS) which is world’s oldest agency with soil protection and reclamation mission (1907). The farm includes several minor households and covers 8000 ha in total. It was founded in the place where severe erosion and frequent sand storms forced local inhabitants to leave the area in the period 1885-1925. In 1944, Icelandic government purchased the land and undertook efforts to restore the land to the sustainable production. 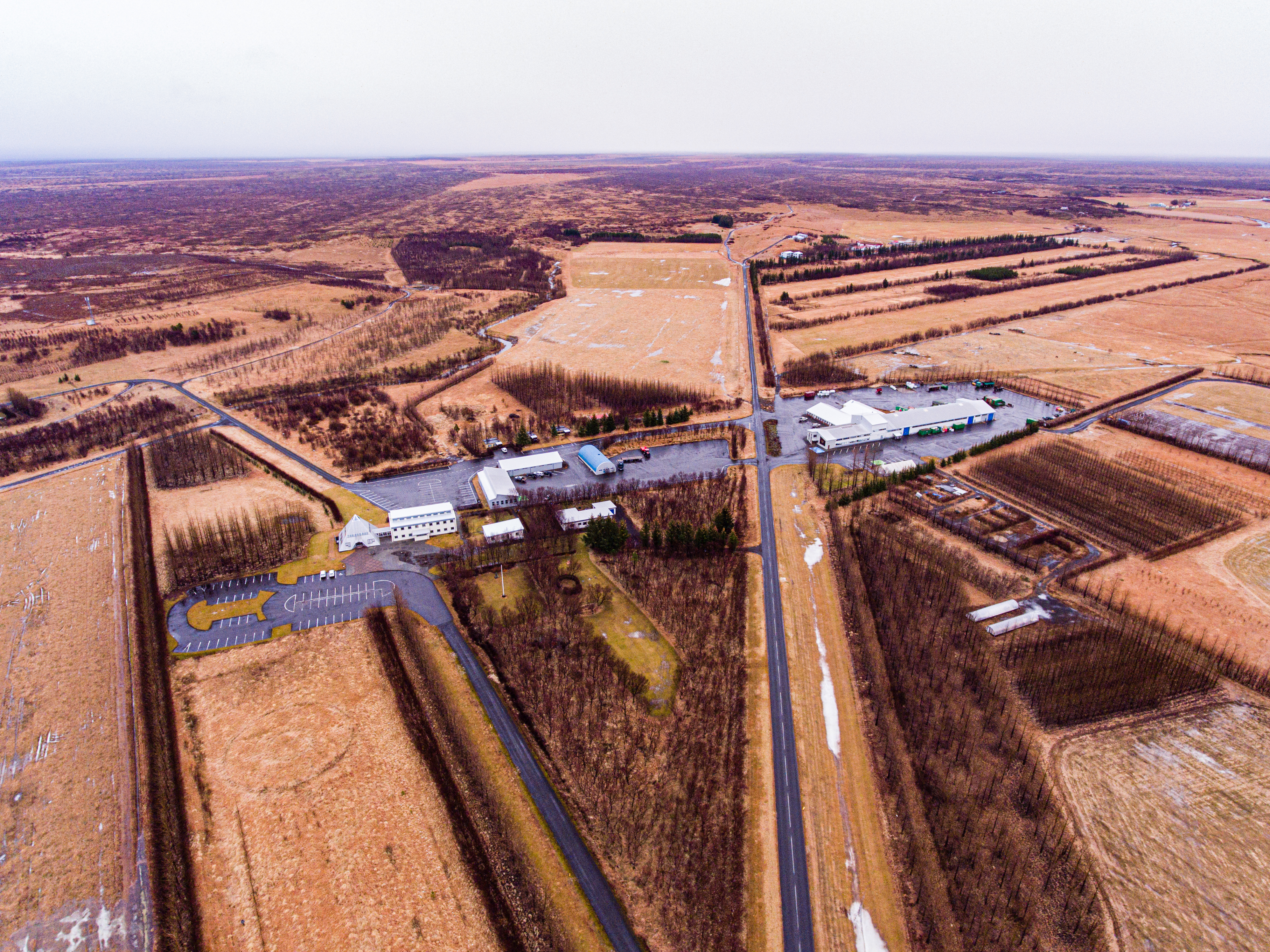 After many years of intensive work, the farm is presently simply submerged in greenness. Árni Bragason, the current managing director, speaks of the place with real enthusiasm and passion. He draws attention to windbreaks design. The belts are characterised by specific structure and include two external rows of lower height vegetation (Salix phylicifolia, Betula pubescens) and one internal row of balsam poplar (Populus tricocarpa), where distance between rows is 2.5-3 meters, giving 5-6 m belt total width. Poplars space could be even as dense as 1 meter, but usually is in the range 1.5 – 2 m. Such high density of trees could be achieved due to use a narrow, cylindrical crown type poplar clones. Willows are planted with space 0,5m - 1,0 m, reach quite dense canopy cover through numerous coppice shoots. If required, to improve the density, willow is cutting at 1 m height. Apart from microclimate function, high density allows acquisition of large number of stem cuttings as well. It turns out that such windbreaks are quite common in Icelandic farms, although number of rows can differ (usualy 1 to 3 rows). Sometimes extra row of birch or spruce is added. All tree species, used in windbreaks are pioneer ones, able to survive and grow under harsh conditions. Because of strong growthpoplar is called “Eucalyptus of the North”. Its extensive and shallow root system performs equally well on initial volcanic soils. Finally, ease reproduction by stem cuttings makes the poplar ideal for the use in harsh environments. Balsam poplar, planted here is not a native species, it was first introduced to Iceland in 1944 from Alaska, USA (Bragason 1995), however currently used clones are hybrids of individuals. They seem perfectly adapted to Iceland conditions and are very popular among farmers and foresters. 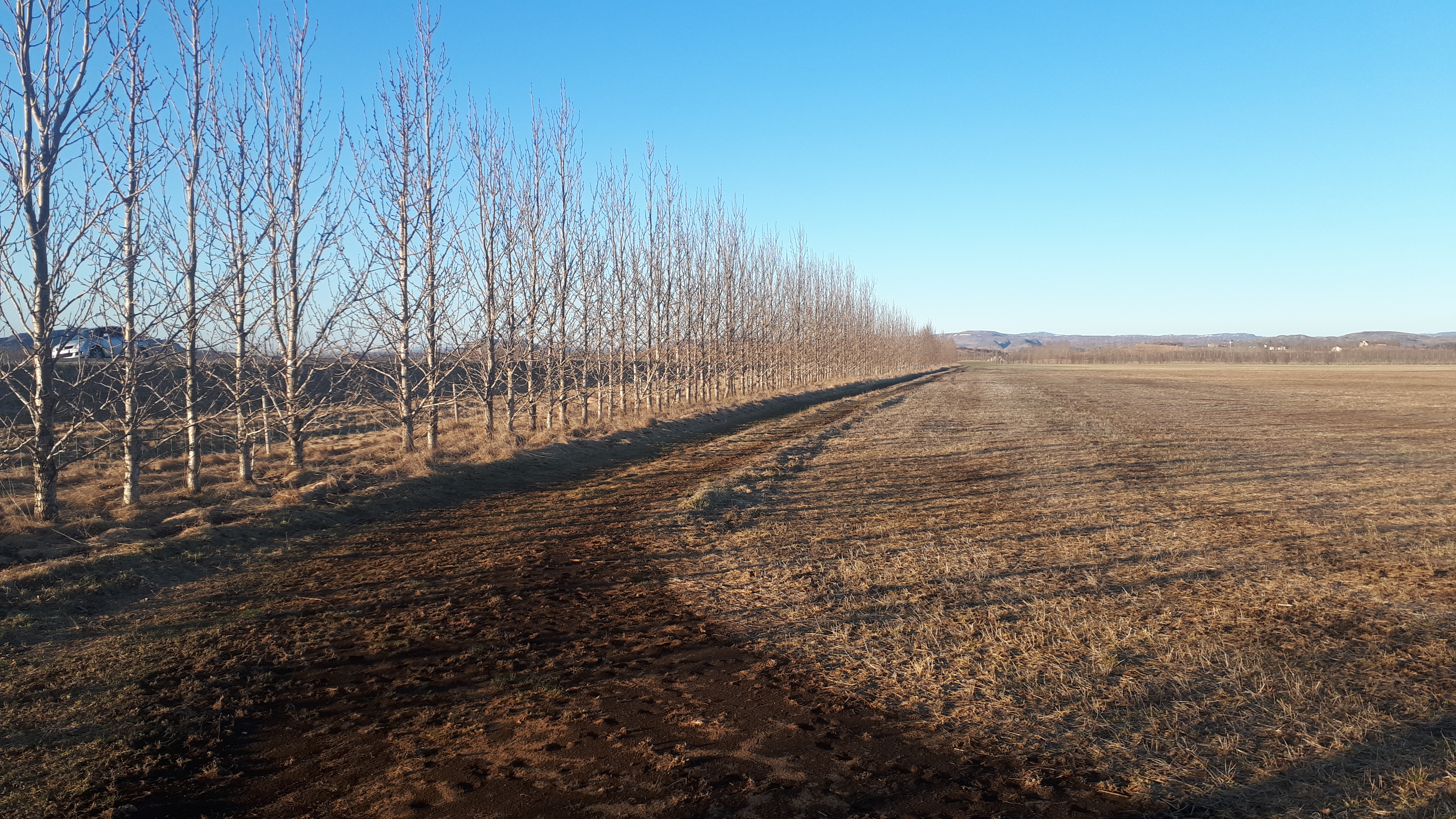 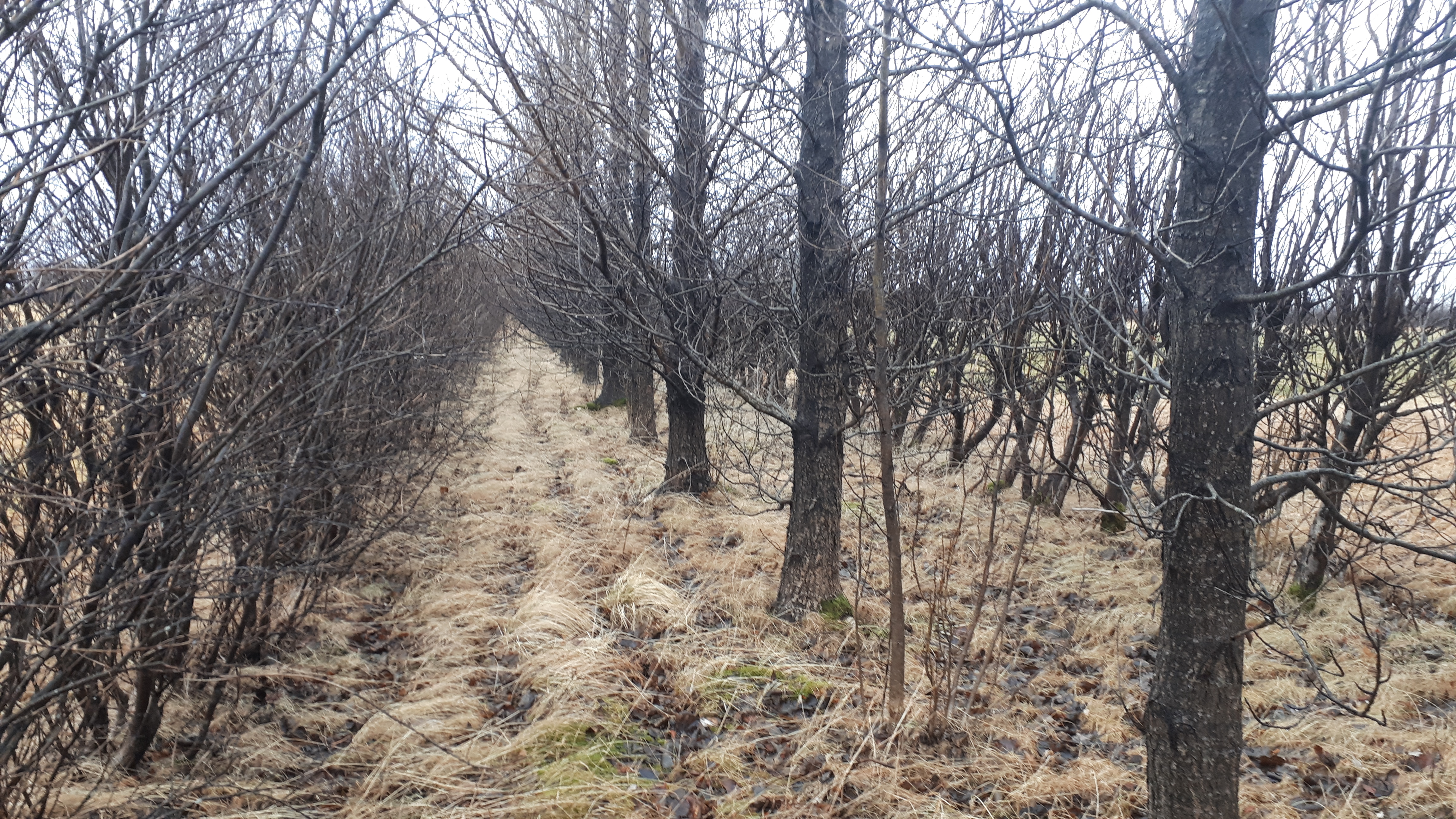 The first windbreaks has been planted in Gunarsholt in 1980 and initially included spruce as well (Picea sitchensis). After some time, it turned out, too high plants density and chosen species content significantly limited light availability to crops and reduced barley yield. Presently, these plots are used as pasture.

Part of the farm land is used also for afforestation purposes. SCS in cooperation with Icelandic Forest Service (Skógræktin) has started in 2005 Hekluskógar (Hekla forests project). Hekla region consists mostly of desertified land at fairly low elevation. The aim is to afforest up to 100,000 hectares of land, for soil conservation, carbon sequestration and other forest benefits such as recreation and timber production. An interesting idea was to lease land for recreational purposes (summer houses), for a period of 25 years, with the obligation of users to afforest the land. Árni Bragason explains - „In fact, we are intensively preparing for another eruption of Hekla volcano. Herbal vegetation has abilities to withstand effects of volcano dust cover up to 10 centimeters. Trees are resistant to even 30 centimeteres cover”. Hekla forests project get special funding from the Icelandic state budget.

Policy support of Iceland’s government for trees is explicit – instruments supporting establishment and restoration of forest and woodlands stimulated large increase of forest coverage. Every year almost 8 000 ha is reforested. The total forest and woodland cover to very nearly 2% of Iceland’s land area. The goal is to achieve at least 12% of afforested land in Iceland to the year 2100.

Iceland brings back trees to the land and it works for soil and crops very well! We in continental Europe can definitely learn a lot from that case….